Difference between revisions of "PDF Forms"

A PDF document may contain any number of fields appearing on any combination of pages, all of which make up a single, global interactive form spanning the entire document. Arbitrary subsets of these fields can be imported or exported from the document. Interactive forms support the following field types:

The information entered into a PDF form can then be printed with the form itself, or sent to a nominated URL (in a special Forms Data Format, FDF), and potentially saved locally for future reference and/or amendment. Initially such forms were limited in functionality, for example with few or no checks on the validity of entries, but a more advanced type of form structure was introduced in the PDF1.5 release, known as XFA forms, that sought to improve forms handling with calculations, validations and formatting, and results stored in XML format for further use. However, the use of such forms requires that the PDF file is editable unless the data entered is stored separately, and in many instances the facility has been superseded by the use of non-PDF based offline and online forms processing facilities, notably online web-based forms data handling.

Forms handling is fully supported in the Adobe Acrobat Reader and editing software. In the case of Adobe Acrobat there are facilities to create forms from an existing PDF that may contain fields but which has not be declared as a structured form for processing, or from scanning a form in with auto-detection of potential fields. Drumlin's Javelin3 for Windows software also supports selected form field types for standard PDFs (not for encrypted PDFs) with the option to save the file including the form data that was entered. In general the saved file will have a different filename from the original file in order to avoid confusion or overwriting the source form. The screenshot below illustrates the kinds of fields that can be included: 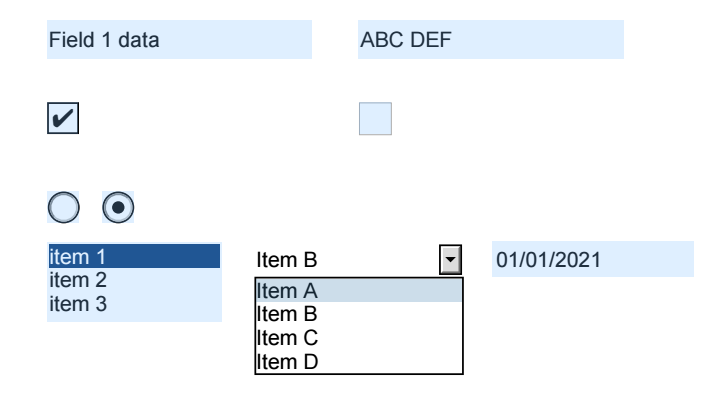